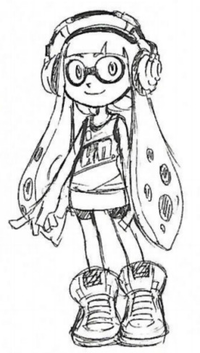 Headphones is a character from the Splatoon manga.

In the Octo Expansion Arc, she wore the Sennyu Headphones, Sennyu Suit and Punk Blacks.

Headphones is usually a cool, calm, and collected Inkling. However, she gets irritated by Goggles whenever he does something idiotic. She acts like a big sister to her team despite being around the same age as the rest of them.