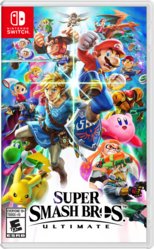 The North American box art of the game.

Super Smash Bros. Ultimate is a game in the Super Smash Bros. series of crossover party fighting games for the Nintendo Switch. It was first teased at the end of a Nintendo Direct on 8 March 2018 before being revealed at E3 2018. It is notable for featuring the return of every playable fighter from the series to date as well as many new ones, including an Inkling. The game was released worldwide on 7 December 2018 and is the third-best-selling game on the Nintendo Switch, with 29.53 million copies sold.[1]

Inkling appears as a newcomer fighter in Super Smash Bros. Ultimate. She is described on the Super Smash Bros. Blog as follows: "Attacks with a variety of weapons. Covering opponents with ink leads to more and more damage - plus these Inklings are really fashionable!"[2] She utilizes the Splattershot, Splat Roller, Splat Bomb, Inkbrush, Blaster, and Slosher for various attacks in her moveset. Inkling switches to her squid form while dashing and spot-dodging, and utilizes it offensively in her pummel, throws, and up special (the Super Jump).

Mii Fighters can also wear custom outfits based on Splatoon characters. The Inkling costume returns from Super Smash Bros. for Nintendo 3DS and Wii U, appearing as the default orange female or blue male Inklings from Splatoon depending on gender, with the outfit section being exclusive to Mii Gunners and wielding the Splattershot. The standalone green Inkling Squid hat also returns. Additionally, a Splatoon 2 costume debuts, appearing as the default pink female or green male Inklings from Splatoon 2 depending on gender. Again, the outfit section is exclusive to Mii Gunners and they wield the Splatoon 2-design Splattershot.

Additionally, some paid DLC costumes were sold separately. Costumes based on Callie and Marie were released on 30 June 2020 and allow Mii Fighters to dress as the Squid Sisters' normal outfits. The Callie outfit is exclusive to Mii Brawlers and the Marie outfit is exclusive to Mii Gunners, wielding the Hero Shot. On 19 October 2021, an Octoling wig (wearing the Octoleet Goggles) and a Judd hat were also released.

The Squid Sisters also appear as an Assist Trophy, an item that helps the player defeat opponents. Upon being summoned, they set up a dance stage and the camera slowly zooms in as they perform a song, restricting the playable area. One playable stage from Splatoon, Moray Towers, is also a stage in Super Smash Bros. Ultimate. In similar fashion to its original appearance, it is constructed mostly of ramps and features Judd and Li'l Judd in the background, judging the winning fighters. It includes many original and remixed versions of Splatoon series music that play while players are fighting on the stage. If a song from a Splatfest is playing, the stage will turn into a nighttime setting, though the track layout does not change.

Spirits from the Splatoon series

Various Splatoon series characters appear as Spirits, characters that can be linked to a fighter and power that fighter up by raising their stats or giving them special abilities. The total list is as follows.

Music from the Splatoon series