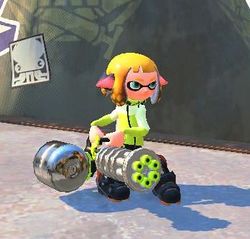 The Hero Splatling is a splatling in Splatoon 2 that is exclusively used in Octo Canyon.

The Hero Splatling has a futuristic design, and unlike most hero weapons, it is primary chrome, with lime green accents. It's straight tank makes it more similiar looking to the Heavy Splatling from Splatoon, rather than the angled tank on the Splatoon 2 version. It is usable in Octo Canyon and can be upgraded one level. Like all hero weapons of Splatoon 2, they come with switchable sub weapons of Splat Bombs, Curling Bombs and Autobombs. It is loaned by Sheldon during the level, Dancing Floors, and can be used in missions after beating the level. Beating all missions in Octo Canyon unlocks the Hero Splatling Replica for purchase at Ammo Knights.

The Hero Splatling Replica is a reward in Splatoon 2 unlocked for purchase at Ammo Knights by beating all missions with the Hero Splatling. It is a splatling-type Main Weapon and is visually identical to the Hero Splatling. Despite its unique appearance, it is simply a reskin of the Heavy Splatling, sharing the same stats and loadout, Sprinkler and Sting Ray.