The Grizzco Brella is a Salmon Run and Salmon Run Next Wave rare weapon in Splatoon 2 and Splatoon 3. It appears to be an illegally modified Splat Brella.

The weapon is a rapid firing brella weapon. Unlike other brellas, this weapon has no canopy. Instead, holding down the

It could be that the mechanism has been focused on firing ink rather than having a shield open which would give the Grizzco Brella a higher rate of fire that outclasses even the Undercover Brella.

The Grizzco Brella is somewhat similar in appearance to the Splat Brella. The shield has been removed, revealing the metal poles usually covered by it. A small green and white lifesaver is strapped around the muzzle. Three yellow pill bottles with white caps and unknown contents are sticking out of the center pole. 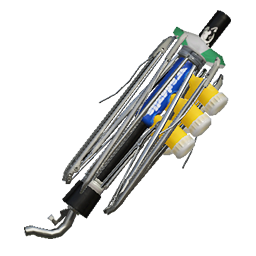 The Grizzco Brella is a rare weapon only available during Salmon Run wildcard rotations. It was first available on 15 October 2017 at 00:00 UTC.

The Grizzco Brella was available during the following Wildcard rotations:

The weapon is a Splat Brella that was modified by Grizzco.