The Grizzco Blaster is a Salmon Run rare weapon in Splatoon 2 and Splatoon 3. It appears to be an illegally modified Blaster.

The weapon is a short-ranged blaster with an extremely high firing speed probably due to most of its frame being stripped down and modified. The range of the weapon is comparable to the Luna Blaster while the firing rate of the weapon is greater than even the Clash Blaster.

The Grizzco Blaster is somewhat similar in appearance to the Blaster. However, the front has been completely stripped off, revealing the metal frame and inner workings. Multiple red and orange wires and metal blocks can be seen. Sticking out of the top are four yellow pill bottles with white caps, the contents of which are unknown. The ink tank has a black Grizzco Industries logo on the side. 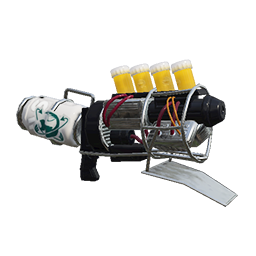 The Grizzco Blaster is a rare weapon only available during Salmon Run wildcard rotations. It was first available on 16 September 2017 at 00:00 UTC.

The Grizzco Blaster was available during the following Wildcard rotations:

The weapon is a Blaster that was modified by Grizzco Industries.