Equipment is a collective term referring to both weapons and gear that a player has equipped (placed on their character). 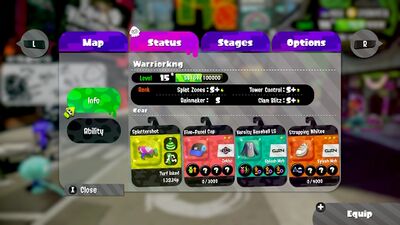 The Info Screen as seen in Splatoon 2

The Info Screen, known in Splatoon as the Gear(NA)[a] or Equipment(EU/OC)[b] screen, is a menu that displays the player's current information. It is located on the Wii U GamePad in Splatoon and on the menu's Status tab in Splatoon 2.

It includes the player's:

or any Nintendo Switch controller opens the equip screen. 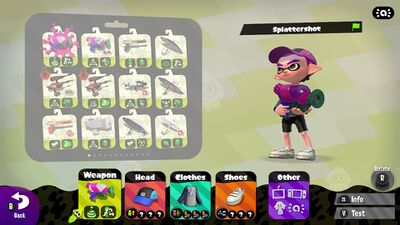 The Equip Screen as seen in Splatoon 2. An Inkling is wearing the Jet Cap, Black Baseball LS, and the Strapping Whites

From the equip screen, the player can change their weapon or gear. Information about each item can be read by pressing

. When a weapon is highlighted,

can be pressed to access the Shooting Range with that weapon. The player's Inkling can be rotated with