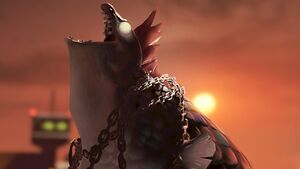 Xtrawave is a special event in Salmon Run Next Wave. In an Xtrawave, a King Salmonid appears, and players must work together to defeat it within the allotted time.

The chance of triggering an Xtrawave increases as players' Salmometers fill. When an Xtrawave has been chosen to occur, the ending jingle after the third wave plays in a distorted manner, and a new wave begins at the same tide level with the text "Emergency!" displayed on-screen as an alarm blares. A King Salmonid will appear along with other Boss Salmonids. All players are given one special each, regardless of how many had been used beforehand. Players are also given an egg cannon, which allows them to fire Golden Eggs that do a large amount of damage (800 per shot) to the King Salmonid. Losing the Xtrawave does not count as losing the shift. The player will gain their normal amount of points and an extra 50 points for clearing the Xtrawave, on top of the 50 bonus points for clearing wave 3. The players will also be awarded fish scales based on the hazard level and the amount of damage inflicted upon the King Salmonid.

Each player has a Salmometer (called "smell" in the game's files) that increases by 1 after every shift without encountering a King Salmonid, no matter the outcome of the shift (win or loss at any wave). This meter can be seen in the top right of the screen while in the Grizzco building. It starts out empty until it becomes full after 5 shifts, or an encounter happens, resetting it back to zero.

The sum of every team member's Salmometer gives the probability of a King Salmonid appearing at the end of wave 3. When all four meters are full, the encounter is guaranteed.

Note that the visual representation below is only for easier readability, not the exact meters needed. For example, four meters at 1 would be equal to one meter at 4.