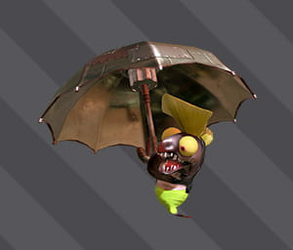 Drizzlers are Boss Salmonids that appear in Salmon Run in Splatoon 2 and Splatoon 3.

They use their umbrellas to fly around the stage. Once they find a spot, they drop down and use their umbrella as a shield. While like this, Drizzlers fire a projectile, which bears a slight resemblance to a Torpedo, into the air that rains down ink on nearby areas, similar to the Ink Storm. The recoil from their weapons causes Drizzlers to flip upside-down after firing, leaving themselves vulnerable to being splatted. They can also be hit from below as they drift from one location to another and even when they're in their umbrella on spots with uneven terrain with accurate weapons (Like Chargers), though this is impractical. The projectiles themselves can also be reflected if shot at, which will defeat the Drizzlers instantly upon direct hit. Their storms will only splat a player if stayed in too long and are easily avoided unless trapped. Drizzlers can be a good source of Golden Eggs in a pinch as they will actively approach the nearest player, so a useful tactic is to not approach them, otherwise they will land and start firing, then move closer to the Egg Basket to lure them while shooting the projectiles away from them for faster Golden Egg collection.

Splatting Drizzlers a specific number of times in Salmon Run: Next Wave will reward the player with special badges that they can use on their Splashtag.