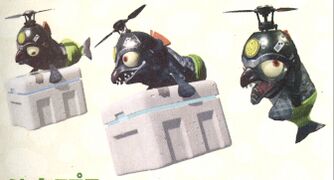 Chinooks are Event-specific Salmonids that appear exclusively during the Mothership event. Each one drops one Golden Egg when splatted during this Occurrence, acting as the primary source of Golden eggs throughout. The Mothership itself can also drop Golden Eggs if attacked directly, though this may be due to players splatting the Chinooks aboard it.

Chinooks are similar in appearance to Chum. They wear metal propeller headlamp helmets that allow them to fly, making them similar to an Octocopter in that regard. They carry large crates from the Mothership that resemble white styrofoam coolers, with a cyan glow under the lid, and do not follow the Mothership when it goes to the egg basket. Splatting the coolers they place independent of the Chinooks does not grant any Golden Eggs.

Chinooks do not attack directly. The crates they drop spawn Lesser Salmonids. The crates glow red when they are about to open, and eventually explode. They can be destroyed before either occur. The crates the Chinook carries deal small amounts of damage when touched in mid-air or when they explode. With enough damage taken beforehand, the explosion can splat the player.

After Chinooks drop an enemy crate, they quickly take off, but may still drop Golden eggs if splatted before their departure.