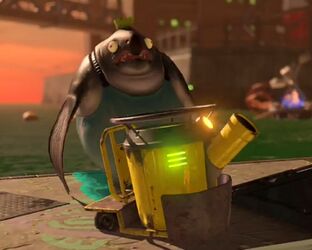 Big Shots are Boss Salmonids that appear in Salmon Run Next Wave in Splatoon 3.

The Big Shot is a Boss Salmonid similar to a Cohock but larger, and wears a turquoise tank top rather than green overalls and has a short lime-green stubby bit of hair on its head. It spawns with a Big Shot launcher near the shoreline and fires a cannonball that will land near the egg basket. The cannonball then bounces up and down in a similar fashion to the Wave Breaker. However, the projectile sends off two shock waves before breaking, while the Wave Breaker emits three. The Big Shot itself has considerably high health, but cannot attack directly and merely travels to and from the water to load cannonballs into the launcher. The launcher cannot be broken and will remain till the end of the wave, much like the pillar of the Fish Stick.

Even before the Big Shot is defeated, players can use its Big Shot launcher to fire Golden Eggs toward the egg basket. If multiple Big Shots spawn in a wave, they will all use the same launcher.

The following text is quoted from the Salmonid Field Guide.[1]

Splatting Big Shots a specific number of times in Salmon Run: Next Wave will reward the player with special badges they can use on their Splatshtag.

The term "Big Shot" means a person in a higher class or ranking than most, and is also a play on words relating to its cannon and its size.