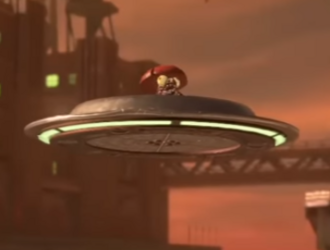 Slammin' Lids are Boss Salmonids that appear in Salmon Run Next Wave in Splatoon 3.

The Slammin' Lid is a flying saucer-shaped aircraft that floats through the air, piloted by a Salmonid in its top center. It creates a force field beneath it similar to the Big Bubbler that protect Salmonids. It also deploys Lesser Salmonids from its underside. It attacks by slamming into the ground when a player passes underneath it, but it takes a moment to fly back upwards after attacking, giving the player an opportunity to get on top of it and splat its pilot. If there is high ground available, the pilot can be attacked directly as well. The pilot is equipped with a soup ladle, which it uses to perform a 360-degree swipe to hit players off its saucer if they stand atop it for too long.

The Slammin' Lid is one of the few Salmonids that can splat other Salmonids, including most Boss Salmonids. When it slams onto a Salmonid, the player who triggered the slam gets the Power Eggs from the splats. This can be used to take down certain foes instantaneously, meaning that it is not always a good idea to neutralize the Slammin' Lid right away.

The Slammin' Lid drivers also has a peculiar appearance. With the dark red top most times being labeled as a hatch, but this is in-fact the hairstyle of the driver Salmonid. With the real hatch being visible behind the driver when standing on the Slammin' Lid. This is probably the reason why the driver is still vulnerable despite seemingly having a headpiece that would be able to protect it.

The driver's side view showing the red hairstyle being part of the Salmonid.

The following text is quoted from the Salmonid Field Guide.[1]

Splatting Slammin' Lids a specific number of times in Salmon Run: Next Wave will reward the player with special badges that they can use on their Splashtag.

"Slammin' Lid" is a pun on the word "salmonid". Additionally, the saucer resembles a pot's lid, that slams down on players beneath it.