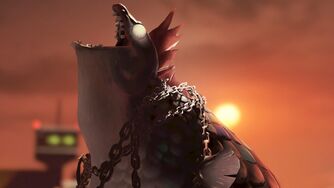 Cohozuna as it appeared upon first reveal.

Cohozunas[1] are King Salmonids that appear in Salmon Run Next Wave during the Xtrawave and Big Run. They are the first and currently only type of King Salmonid.

Cohozunas resemble giant, extremely obese Cohocks with red scales on their backs and gray ones on their sides. They have two glowing bulging white eyes, chains around their neck, and a pair of pants with two belts. They have a mohawk similar to that of the mohawk hairstyle used for Smallfry, and have been described as "unfathomably terrifying" and "ginormous".[2][3]

Cohozunas have two attacks. They can jump high into the air and land on teammates, splatting them instantly if they are underneath it, and dealing heavy damage if they are relatively close to its point of impact. This attack is similar to the Splashdown, with the Splashdown landing marker appearing before it lands. They can also attack by falling onto its front, crushing those before it.

Players can attack Cohozunas by shooting ink at it, or by launching Golden Eggs at it with egg cannons that deal 800 damage per shot. A Cohozuna's size can create problems such as cutting off access to Golden Eggs or trapping teammates in dangerous areas. Despite being an easy target due to the aforementioned size and its sluggish movement, it has massive health and will require a full team concentrating their fire and launching multiple Golden Eggs to have a decent chance of defeating it within 100 seconds. The player is rewarded with fish scales by dealing damage to the Cohozuna, with the exact amount rewarded being based on the hazard level and the amount of damage inflicted upon it.

A Cohozuna's health is based on the room's hazard level. When facing a team of Profreshionals or above, it will have the maximum 40,000 HP.[4]

Splatting Cohozunas a specific number of times in Salmon Run: Next Wave will reward the player with special badges that they can use on their Splashtag.

Cohozuna is a portmanteau of "Cohock" (which in turn is derived from "coho salmon") and "yokozuna", the highest rank in professional sumo wrestling.