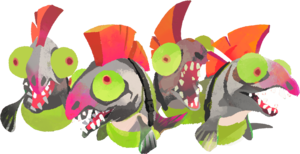 Chums, one of the types of Salmonid.

Boss Salmonids and Lesser Salmonid are the same species, and what determines their appearance is what environment they are raised in. Those who are raised in a harsher environment become Boss Salmonid. Steelheads and Maws have big bodies, while Scrappers and Steel Eels have higher intelligence.

Salmonids regularly return in large numbers from their habitat to where they spawned[1] in order to mature[2], a behavior called a Salmon Run. For them, music signifies the start of such runs, and they play it to raise morale. The best performers from a tribe form a band.[3]

Most Salmonids are seen using cooking utensils as their weapon, with Chums and Cohocks using a frying pan, Smallfry using a spoon, Grillers using a grill, the Stinger using a stack of cooking pots, and the Flyfish using beverage coolers.

In a developer interview,[4] it was revealed that this is due to the Salmonids trying to make themselves look “tasty”. It’s explained that the Salmonids aren’t afraid of dying and regard their death to be a cycle of life and think of all life being part of this cycle. Grillers are said to be the ultimate way of doing so by the Salmonids becoming the contents of the Griller. When the Salmonids fight to death, they feel a sense of unity with themselves and the world. When they are eaten by other creatures, they see their death as a way of being one with the world.

There are floating sculptures based off of cooking utensils in the background of Salmon Run stages, where some also feature food on them. These are built by the Salmonids and symbolize with the belief of being delicious to eat.

Salmonids are an honorable clan; fighting for their clan's pride is seen as equally precious as their values. They take care of keeping their weapon in great shape. Their frying pans, as well as other weapons they wield, are passed down generation to generation.[5]