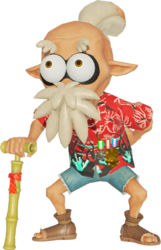 Craig Cuttlefish, originally nicknamed Cap'n Cuttlefish, is a main character in the Splatoon series. As a veteran of the Great Turf War and former captain of the Squidbeak Splatoon and New Squidbeak Splatoon, he often acts as a guide for the protagonist. He issues the player with the Hero Suit and title of Agent 3 in Splatoon's Octo Valley and similarly gives Agent 8 their nickname, helping them through the Deepsea Metro in the Octo Expansion. As of Splatoon 3, he has passed his title as captain on to Agent 3 and acts as the New Squidbeak Splatoon's "senior advisor", but is still the one to give the new Agent 3 their Hero Suit and job title, and assists them throughout the Crater.

He is also the grandfather of Callie and Marie.

Cap'n Cuttlefish is a decorated hero who fought in the Great Turf War between the Inklings and Octarians as the leader of the Squidbeak Splatoon. He originally was a good friend of DJ Octavio, but became his nemesis due to the Great Turf War. After winning the war, he began watching over the Octarians in Octo Valley, but failed to prevent them from stealing the Great Zapfish.

Following his first meeting with Pearl, he has taken up rapping as a hobby.

Around one hundred years before the events of Splatoon, Cap'n Cuttlefish was a member of the Inkling military, and personally knew DJ Octavio. However, the onset of the Great Turf War forced him to battle the Octarians, where he served as leader of an Inkling army division called the Squidbeak Splatoon; he fought alongside Ammoses Shellendorf, Judd, and two unidentified Inkling soldiers. While he was still a second lieutenant, Cuttlefish battled Octavio during the siege of Arowana Castle. Thanks to Cuttlefish's efforts, he was promoted to the rank of captain and the Inklings eventually won the war. It is unknown what he did between the end of the war and the beginning of Splatoon, but he seems to have changed little.

By the time of Splatoon, Cap'n Cuttlefish could be found poking his head out of a manhole in the corner of Inkopolis Plaza. Upon being met by a young Inkling at his shack in Octo Valley, he explained to them how the Octarians had returned and stolen the Great Zapfish before recruiting them as Agent 3 of the New Squidbeak Splatoon to help take the Great Zapfish back. He assisted Agent 3 during the levels until the Octowhirl was defeated, after which he got kidnapped by DJ Octavio. His former protégés and granddaughters, Agents 1 and 2, took over his role until the final mission, in which Agent 3 battled DJ Octavio to rescue Cuttlefish and the Great Zapfish. During the final phase of the battle, the two agents revealed themselves as the Squid Sisters and overrode the boss music, allowing Cuttlefish to set himself free while Octavio was defeated.

Replaying the final mission results in new dialogue, describing how DJ Octavio escaped from his snow globe and briefly recaptured Cuttlefish while he was distracted.

After the events of Splatoon, Cap'n Cuttlefish disappeared from Octo Valley. While the Squid Sisters initially believed there to be no cause for concern, his disappearance led Marie to discover that DJ Octavio was able to escape. As a result, in Splatoon 2, she took over Cuttlefish's role as guide and mentor to the newly-recruited Agent 4. It was later revealed that Cuttlefish went off traveling with Agent 3 for "a research trip to the cape", and as a result, was not seen in person. However, an unused dialogue icon for Cap'n Cuttlefish was seen in Splatoon 2's artbook. 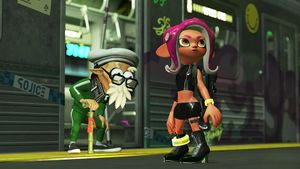 Cap'n Cuttlefish reappeared in the Octo Expansion. He and Agent 3 briefly clashed with an Octoling before the three of them were attacked, leaving Cuttlefish and the amnesiac Octoling trapped in the Deepsea Metro. Teaming up, Cuttlefish eventually nicknamed the Octoling as Agent 8 and decided to help them retrieve the four thangs and escape to Inkopolis. He also acted as a guide for Agent 8 throughout the tests, remaining on the metro train to give help alongside Pearl and Marina.

During this time, Cuttlefish took part in Marina's chat room under the username of 'CraigCuttlefish'. After learning how the chat room worked, Cuttlefish learned about Pearl and Marina's respective pasts. He was the first to realize that Marina was an Octoling but continued to support her after learning of her defecting from the Octarian military, alongside the other Octolings that escaped to Inkopolis.

Once Agent 8 collected the four thangs, Cuttlefish joined them walking into the contraption the Telephone created to escape to the surface. However, the device turned out to be a blender intended to purify the pair. Agent 3 saved them, knocking themselves out, and Cuttlefish stayed behind to care for Agent 3 while Agent 8 escaped. However, the Telephone eventually awoke again, capturing Cuttlefish and brainwashing Agent 3 and forcing them to try to kill Agent 8. After Agent 8 saved Agent 3, they joined up in escaping to the surface, as well as meeting Off the Hook in person. As the Telephone revealed itself as Commander Tartar, using the NILS Statue to destroy Inkopolis, Cuttlefish stayed behind on Marina's helicopter as the "hype man", looking after Agent 3 as the rest of the group defeated Tartar by using Pearl's Princess Cannon. With the threat neutralized, he eventually joined Agent 8, Agent 3, and Off the Hook and returned to Inkopolis.

Cuttlefish later returned to the Deepsea Metro train, wanting to check on everyone there, and continued to help Agent 8 during their tests. He also briefly encountered Marie in Marina's chat room. Despite not telling her exactly where he was, he promised to return for her soon. 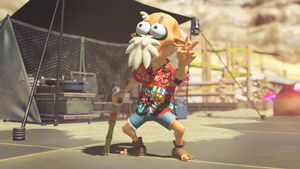 Cap'n Cuttlefish makes a reappearance in Splatoon 3. He has retired and handed over his title of captain of the New Squidbeak Splatoon to Agent 3. He finds a new recruit in Splatsville and calls them the new Agent 3. For the first four levels of Return of the Mammalians, he helps them out like in the previous games. After defeating DJ Octavio, the ground falls and Smallfry, Cap'n Cuttlefish, and Agent 3 fall into Alterna. Agent 3 and Cap'n Cuttlefish get separated during the fall.

Upon defeating the first boss, Cap'n Cuttlefish contacts the new Agent 3 and reveals he had been kidnapped. Subsequent calls reveal the perpetrator to be Mr. Grizz. While Agent 3 is heading up the rocket, Mr. Grizz explains that he needs Cap'n Cuttlefish's brain as part of his plan, and steals it moments before re-uniting with the new Agent 3; when the New Squidbeak Splatoon arrives, he is left a dry husk, and is assumed dead. Captain holds him in their arms and sheds a tear, which provides enough moisture to revitalize Cap'n Cuttlefish, albeit in a withered state similar in appearance to Japanese-style sun-dried squid. Cap'n Cuttlefish then continues to assist Agent 3 in the final boss as mission control.

After Mr. Grizz's defeat, Cap'n Cuttlefish remains in the New Squidbeak Splatoon camp in Future Utopia Island with Callie and Marie, floating in his withered state, and can be talked to freely.