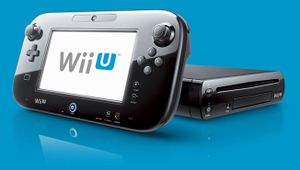 A black Wii U console with a Wii U GamePad.

The Wii U is the first eighth-generation Nintendo home console and the successor to the Wii. Officially revealed on 7 June 2011 and released on 18 November 2012, it is the console where the Splatoon series eventually made its debut starting with Splatoon. Despite being met with mixed-to-positive critical reception, the Wii U was a commercial disappointment for Nintendo, selling 13.56 million units as of 2019[1] and becoming Nintendo's lowest-selling home console to date. Production on the system officially ended in January 2017, just before it was followed by the Nintendo Switch on 3 March 2017.

The Wii U system, like the handheld Nintendo DS and 3DS systems, comes with a second screen, known as the Wii U GamePad. It was exclusively marketed as a home console due to how the GamePad cannot be taken on the go. One of its main features is the GamePad's large 480p touch screen, which allows for a different display to what is on the TV (displayed at up to 1080p HD) and through which some games can be played on the GamePad alone. The Wii U Pro Controller is also compatible to provide more traditional controls. The Wii U offers backwards compatibility with all Wii games and controllers, including the Wii Remote and Wii Classic Controller, and has a service known as Nintendo eShop, where digital versions of games can be purchased. These, along with Splatoon, include some classic Nintendo titles which are played on the Virtual Console.