The Wii Remote is the main controller for the Nintendo Wii, that can also be used for the Wii U. It has an extremely small usage in Splatoon's Battle Dojo.

The Wii Remote is a controller that heavily utilises motion controls. It is rectangular and has many familiar buttons such as 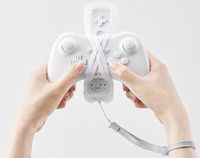 as described on the Splatoon Tumblr, Live from Squid Research Lab.