From Inkipedia, the Splatoon wiki
< User:ChessMaster
Jump to navigation Jump to search 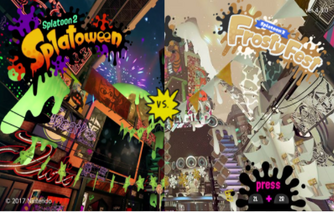 Happy 4th anniversary Splatoon 2! We are celebrating Splatoon 2's anniversary with a Minifest! Which major Splatfest event was better? Splatoween or FrostyFest? Anybody can join! Just follow the steps to join!

Special News for this Minifest!

Since this is a special Minifest, the Minifest will have a special Mechanic! The special mechanic?

Do you have a stage you wish would not appear during the Minifest? Well this Minifest will allow those dreams to come true! When voting for your team, players can vote for up to five stages they want to be removed. The top five stages will be removed from rotation. Votes to remove a stage will only be taken before the fest and will not be counted while the fest is happening.

This Minifest is the final time that Pearl and Marina Dialogue, and Turf Inked Percent Average will be used in these Minifests. They instead will be replaced with surprises!