Could anybody add the second and third North American Splatfest teams as Barnsquids?

It's very hard to think of ideas for some, and even hard to make them. If you have any easyish ideas, put them on my talk and I could make them. I have an idea for the third one though, but for the second I'm clueless.

Maybe for the Roller Coaster one you could add a rail near it and the squid would be green, and for Water Slides you could add like, splashes and then a purple squid.

I put a Marshmallow Barnsquid on my profile, and everything but the image came out alright. Could anybody help me with this? --Sigma talk 20:14, 25 August 2015 (UTC)

Ah yeah, some of chriscoded's Barnsquids seem to be having template problems. I'll try sorting out the marshmallow one, at least. --Bzeep! talk 23:33, 25 August 2015 (UTC)

Filenames were all wrong, which messed up the template. Everything is fixed now though.

I've been trying, they just don't seem to come out right. Especially Cars and Planes. :u
We do still have BarnsquidTeam Squid.png and BarnsquidTeam Octopus.png though, if Azoth's okay with usin em. --Bzeep! talk 20:39, 20 October 2015 (UTC)

I could get the rest done at the weekend maybe. They all seem easy enough, it's just a matter of if I remember and if I feel like it.

Can we place Barnsquids on our own page or do administrators and bureaucrats award them?

Can we place ones from other regions Splatfests? Cuz I really like some of the Japanese, American, and European ones (I only got Splatoon a day after my birthday, see.) --Adster1005 (talk) 10:26, 23 December 2015 (UTC)

Can we make our own Barnsquids?

Yes, you can make your own Barnsquids, but I'd run them by a veteran Barnsquid creator to see if they have any tips before adding it to the official template! -

I made some new barnsquids for weapons, what do you think?

I made the Barnsquids using the template, bronze, silver and gold barnsquids, copying the picture to Google Drawing, then inserting the picture I had downloaded of the Splat Roller. What does everyone else think? --Adster1005 (talk) 09:19, 28 December 2015 (UTC)

Those are awesome ideas! Because file size may come into play, I'm wondering if Bzeep could make Barnsquids that will work with the template using this concept. Thanks, Adster! -

Uh.. that's over 320 separate Barnsquids. If people want to do something like that just for their own page, fine, but I really don't think it's a good idea to bloat up the template with four for every weapon. If we do have Barnsquids for turf inked with different weapons, have no more than one for each. Something like... "_____ Master" (e.g., "New Squiffer Master") for getting 999,999 points with it. Something special, yknow? --Bzeep! talk 00:25, 29 December 2015 (UTC)

Putting the needed Barnsquids in a list so we can keep track of them. I've been slacking... 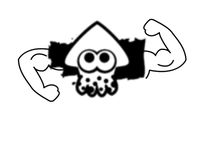 Can't we reuse the money barnsquid for Team Rich? :P

We caaaaannn, but Love vs. Money was about, like, what's more important in the world. Fit vs. Rich is a personal thing... what you want to be yourself. So instead of it just being money in general, I'm thinking of making it look like a rich person, yeah? --Bzeep! talk 16:30, 29 December 2015 (UTC)

I made a prototype image for Mountain Food. (It's a just rough) I think it and its counterpart may be like this. File:TestBarnsquid mountain food.png --Azoth (talk) 19:35, 29 December 2015 (UTC)

Can we place ones from other regions Splatfests? 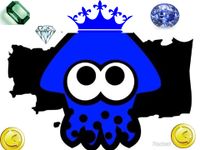 Good, but what's up with the watermark? I'd also rather not use stock art TBH.

Ah, Ok i didn't notice that. Perhaps, if we keep the main design and just replace the image. There isn't paint on a chromebook, and I can't get anything on Chrome Web Store either. Do you have any ideas for any of the others I posted earlier? --Adster1005 (talk) 21:27, 1 February 2016 (UTC)

Is anyone making any new barnsquids? There are lots of Splatfest barnsquids that need to be made. — Preceding unsigned comment added by Mr squid (talk • contribs)

I had this idea for a Barnsquid that was for people who purchased the Wii U or Switch just to play Splatoon. Does anyone think this is a good idea? BlazingInferno (talk) 02:08, 9 March 2017 (UTC)