The Splatoon Global Testfire was a free Splatoon demo available on the Nintendo eShop for Wii U. It allowed players to engage in free four-versus-four Turf War battles at scheduled times ahead of the release of the game. It was available for download before the scheduled times, but server connection was not possible beforehand. The application was made unavailable for download afterwards.

It was the first demo of Splatoon that was released to the public after the E3 2014 Splatoon demo and was succeeded by the Splatoon Testfire demo in August 2015.[1]

During the Global Testfire, players were able to customize their Inklings and enter a tutorial area where they could pop balloons and get accustomed to the game's controls. They were then able to enter online matches of Turf War and use the Splattershot Jr., Splattershot, Splat Roller, and Splat Charger on both Saltspray Rig and Walleye Warehouse.

In order to ensure a sufficient number of players for the Testfire, Nintendo designated the following times to be used. Each session ran for one hour unless otherwise stated. 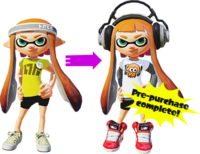 Promotional image of the pre-purchase gear.

Players were given the option to pre-purchase Splatoon at various points in the Testfire demo. Players who pre-purchased were awarded special gear to use for the remainder of the event. The gear was only cosmetically different from the gear that regular players had access to, and had the same abilities. This gear did not carry over into the full version of the game.

Pre-purchase players were given Studio Headphones with Ink Recovery Up, an unnamed shirt that resembles White Tee and Zink Layered LS with a team-colored squid sticker and Quick Respawn, and Red Hi-Horses with Special Saver. 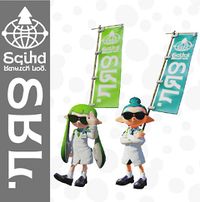 Promotional image for the event.

During the Testfire, real-life members of the Squid Research Lab participated in battles, appearing in-game as Inklings with special research gear. The gear was only cosmetically different from the gear that regular players had access to, and had the same abilities.

Squid Research Lab gear featured a set of dark sunglasses with Ink Recovery Up, a lab coat with a large banner attached in the team color and Quick Respawn, and a pair of black dress shoes with white socks and Special Saver.