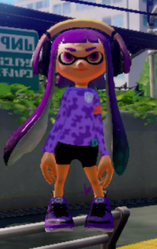 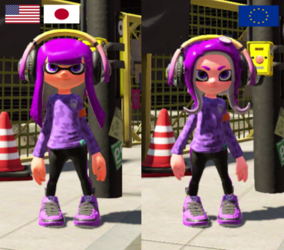 Hello, YourUsername, I'm DJ Particle, RIAAcidal Lesbian Parodist. I've been video gaming since 1978, the days of the pong consoles (first household console Magnavox Odyssey 4000 [released Aug 1977]). Nintendo fanatic since 1987 and a charter subscriber to Nintendo Power in 1988. I currently own the PS2, Wii (Mark 1 - doubles as a Game Cube), Wii U, New 2DS XL, and Switch (all NA region consoles).

My history with Splatoon is a bit checkered. I got the first game in August 2015, and struggled with the motion and double-stick controls. Intimidated, I put the game on the back burner for almost a year (until May 18, 2016). When my partner got her own Wii U and Splatoon, I vowed to conquer my own hubris so I could play with her, and ended up getting thoroughly hooked.

Unfortunately, this meant I missed every Splatfest from the first game save for the final one, and even then, since it was taking place on a weekend I wouldn't be home, I couldn't actually splat in it, so I at least picked up the Splatfest Tee for Team Callie.

To make up for my lack of Splatfest participation in the first game, I bought all three regions of the second game, and have participated in every Splatfest across those regions since release, and Queened out all but one. I also ran Minifests after official Splatfests ended to keep the excitement going until Splatoon 3 neared.

I'm more hooked than ever now, and have logged over 4500 hours to date between the three regions of Splatoon 2, and my time in Splatoon 3 promises to be even greater! I also have never seen a more welcoming or fun video gaming community than the Splatoon community, and I'm glad to be a part of it. Splat well, squids!

Sometimes I may refer to certain weapons/stages by different or alternate names.

Who is "Bad Cop Callie"?

If you're unfortunate enough to disconnect your way into Splat Jail, headcanon says your toon has to deal with the Squid Sisters interrogating you, with one as "good cop" and one as "bad cop". Unfortunately for all of us, Callie wanted to be the "bad cop"...after all, she's seen it lots of times on TV! *heh* Think of perky Callie TRYING to be the "bad cop", accusing your toon of all sorts of silly impossible shenanigans ("You hacked the map...WITH YOUR MIND!!!"), and mentioning she has "zillions" of evidence against you (MARIE: "Callie, "zillion" isn't a number! *sigh*")...and failing hilariously. Poor Marie can only facepalm in disbelief.