Heyo, Adam here! On Splatoon 2 and other games, you may find me as ★Adam★ (except for the odd occasions where I have to use ☆Adam☆ or *Adam*). Around here I mostly keep the Live performances section up-to-date and do things involving localizations (especially Spanish) as well. 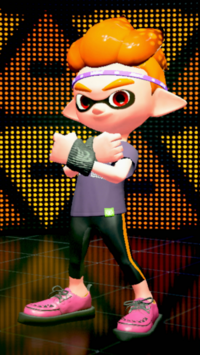 And... I after this point I got tired of documenting how well I do in Rank X. :P Maybe I'll continue for Splatoon 3...

All Splatfest titles are King/Queen/Royalty. (I'm 90% sure.)

I'm currently planning on participating in all international Splatfest themes using alternate accounts. Time will tell how feasible that will be.

Originally starting out as a recreation of the first Tentalive concert that can be projected onto a display of some sort - apparently, this is what would be called in some circles as "hologram ready," this turned into a passion project to hold my own Splatoon concert in the States. A playlist of the progress towards TENTALIVE @ HOME can be seen

here. The Cefalobration playlist can be seen

Prior to dataminers consistently extracting dialogue for all languages, I used to document the NOA Spanish localization's dialogue. All Splatoon 2 dialogues, most Splatoon 3 dialogues, and some Splatoon 1 dialogues can be seen in this

Additionally, I have a list for NOA French dialogue for Splatoon 3

I went through as many nooks and crannies of every decorated Splatfest stage during special events (except for Shifty Station, as I lost the recons I did for them at some point and figured that the decorations would be retained for these stages if they were to come back). Here's a list of playlists... list-ception?

In addition, I recorded

special stage intros for every stage. Unfortunately, the recon function has been nerfed in Splatoon 3, so I will not be able to do similar Splatfest recons unless I mod my Switch console.