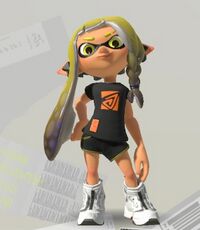 Hi there, fellow Squidkids & Octolads! How are ya? I'm P.J. GT. A 21 year-old biological male, devoted Christian and Nintendo fan that lives in the U.S.A. I have been a huge fan of Splatoon since I got the second Game. See ya on the Splattlefield! #ShiverFanboy!

NOTE: I update my Stats & Records once per week on Fridays, or the day before a Season ends, where I'll also update other important sections.

My playstyle is an aggressive one. I don't always think of flanking that much on certain stages. I sometimes get frustrated if I'm on a losing streak. My preferred control sensitivities are: -1 on both Motion & Sticks. Also my preferred Emote in Splatoon 3 is
"Flip Out". 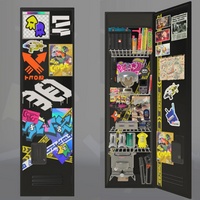 How I got into Splatoon

Before Splatoon, I was a common Mario fanboy. Batting my eye at other game series like "Yeah, whatevs". I even had some imaginary Mario fan-games I drew up when I was 14 (which I completely abandoned now), as well playing the Skylanders series. But when my brother got Super Smash Bros. for Wii U, I learned that there were other game series that looked interesting, mainly Mega Man and Metroid, and got both Mega Man 2 and Super Metroid on VC. But in 2016, I began to see trailers for Splatoon 1, including its Direct, as I binged Nintendo Minute and past Nintendo Directs. Then for that year, I had an on/off interest in the game. But it was when the Nintendo Switch was announced that I decided not to get it. But then...

In July of 2017, me and my brother each finally got our own Nintendo Switch from console bundles at GameStop (after being scammed on Amazon for the consoles...). My brother's bundle had ARMS and Mario Kart 8 Deluxe, while mine also had ARMS but instead had The Legend of Zelda: Breath of the Wild. But later that weekend, Splatoon 2 came out and we didn't have interest in ARMS, so we went back to GameStop to turn them in and settled on getting Splatoon 2 instead, as I finally settled my interest in the series. It was then, as I heard the soundtrack and got introduced to Off the Hook, where I got...HOOKED! (Pun intended.) Sure my first matches were horrible, as I was still getting used to the controls and learning its mechanics. But I eventually got to be decent at it. A few weeks later, I decided to get a second copy of Splatoon 2 for my brother so we can play online together instead of sharing one copy. But his interest in it dwindled over a year, while I was addicted to it from the onset. Later, as the Octo Expansion was announced, I was very excited for it and made my preorder. Then as I watched the official Nintendo-held Splatoon 2 tournaments of that year, I decided to adjust my playstyle to not be as childish and picked up some of the Weapons that were meta at the time.

Soon the SPLATOCALYPSE was in full swing and I had a blast participating. Until, I went on a short one month hiatus after Version 5.0 released to play Smash Ultimate, until I got the itch to return to the game, as I discovered the official Splatoon Manga here on Inkipedia and disliked it for the childish humor the protagonists had and their tendency to beat tough and elite opponents through idiocy tactics. And it also gave me the inspiration to make my own Splatoon headcanon characters and draw them up during breaks at school (which is further detailed and listed in my User Sandbox, which is linked above). Then... The pandemic occurred and had a decent time playing the bonus rerun Splatfests and watching competitive Splatoon players on YouTube to sharpen my skills at the game and also joining this wiki in the process. But a month after the Mario 35th Splatfest...

It was the day of the February 17, 2021 Nintendo Direct. As the final presentation was going to be revealed... Hoping for news on BotW2, something out of the blue, or just something not interesting, but as I saw the Inkling Girl and the Smallfry, it got me stunned, as I thought it was a spin-off some people were theorizing. But as the hub was shown with that estatic drum loop playing and then the title was show as... SPLATOON 3!!! As Splattack! started and the Inklings and Octolings got launched into battle, the hype train was beginning to start as the release window was revealed to be 2022. The euphoric excitement I had kept me up that night as I
re-watched the trailer on repeat. But the wait was lukewarm due to Splatoon 3 not being in the E3 2021 Direct, along with the Hero Mode and Salmon Run trailers in the Directs after it. Until on April 22, 2022... The game's launch was nigh for September 9! The drip-feed of info from SRL was OK to say the least and I got annoyed that people were calling the game "Splatoon 2.5". Then the long awaited Splatoon 3 Direct occurred and the hype was in full force. And the rest is history! Booyah!

Here are lists of what I like & don't like about the Splatoon Series. (Note that all these are my opinions, so please don't splat the messenger!)

This Section includes info on all Splatoon Weapons (Mains, Subs & Specials), as my Mains pics, favorites, most disliked & their Freshness Levels.

This is a list of all the Splatfests & Big Runs I played in for Splatoon 3.

To see what my Agents appearances are, go to my Canon Sandbox Page (link to it above).

Here is a bunch of stuff that is what I like other than Splatoon, merchandise, fun facts about me & my own miscellaneous Splatoon info.

Other Games I Own

Fun Facts About Me