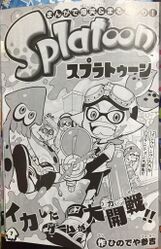 Yellow is the one-shot debut chapter of the Splatoon manga.

It was a shorter installment than what would become standard, published on 15 May 2015 to tie into the release of Splatoon and features earlier versions of Team Blue than the ones that appear in the main serialised version of the manga.

As part of an introduction to Inkopolis and the world of the Inklings, Headphones and Goggles show off their squid-to-humanoid transformations, although Goggles appears naked, having supposedly forgotten to wear clothes. After getting dressed, they meet up at Urchin Underpass with their Team Blue teammates, Specs and Bobble Hat, to take part in a Turf War battle against their regular training partners in Team Yellow (Paintball Mask, Gas Mask, Olive, and Tako) but Goggles admits that he does not know the rules.

Astonished, his friends explain how to play, and the battle begins, with each team member demonstrating their weapon's unique abilities. However, they spend too much time messing around and are quickly caught up to by Team Yellow who claim they are easily going to win. Team Blue begin to fight back, but a sneeze from Goggles leads him to accidentally splat Specs, who is forced to respawn at the spawn point. He decides to Super Jump back to his teammates, but accidentally flies way too far and misses the stage entirely, to the ignorance of his friends who carry on battling without him. With the battle intensifying, Headphones and Bobble Hat shake things up by using their Splash Wall and Splat Bomb sub weapons to splat Tako and Gas Mask, followed up by Goggles activating his special weapon, the Inkzooka, which splats the final two opponents just as time runs out.

Judd calculates the turf coverage and reveals that Team Blue have won. Returning to Inkopolis Plaza, the two teams part ways and promise to battle again, but Headphones wonders where Specs has got to. As it turns out, he is still flying and has reached Octo Valley, to the confusion of the Octarians who see him in the sky.