Howdy! You found me! I'm just a soul who contributes to Inkipedia, nothing special. However, I do have a personality, a "eh, could be better" one. Let us embark on this (not at all) magical adventure through my personality! And before we start, this is my signature:

So far, I have made many edits and 3 new pages. If you want to see them, go look at my user contributions. You can do that by clicking on the "(Contribs)" button in my signature above, or by clicking the "User contributions" on the top of the page. The only reason why I joined is so a Splatuber (or Splatubers) could read the info on pages I've edited. (And I'm still waiting), but now, it's just fun for me to read and make pages. I don't care how long it is, I'd rather read Inkipedia pages all day than read books, and I don't read books! 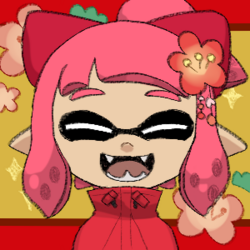 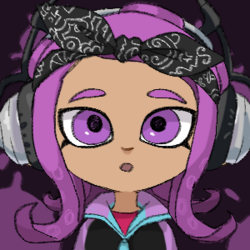 Quick detour, my O.C.'s (on the right) name is Squib! However, this is the name she called herself, as her amnesia made her forget her name! When she arrived at Inkopolis, she wanted to follow inkling culture, so she confusingly named herself Squib, thinking it's a normal name for squidkids to have. She kept the name for so long, and followed inkling culture so much, she forgot she was an Octoling! She has a rambunctious inkling friend, nicknamed Neko-chan (also on the right, but press the category on the top of Squib's image), who Squib confusingly calls her "Neck 'O Chant", as she doesn't know the inkling language well, picking it up from the inklings around her. Despite being crazy, she's crazy good at online battles and is a very helpful person overall. She's also soft inside and she really cares about Squib's safety. Don't they kind of remind you of two famous people around here...?

I'll admit, I'm very late to the scene. I had always supported Splatoon ever since it was announced, but couldn't play it because I didn't (and still don't) have a Wii U. I got the Switch about a year late, but I didn't get Splatoon 2 until around the Chaos vs. Order Splatfest. The reason for that was because I was scared everything would be locked for me, because I didn't have the online membership at the time, but now I do. I bought it when I didn't have a membership, because I thought I never would've gotten the membership, so there was no sense in waiting.

I'm more of a lore person than an online battle person. Mostly because I suck in online battles, but also because it's fun to dive into the deep lore games have (I should pick up FNaF one day...), and Splatoon is no exception. Splatoon is the only game I know with lore on bands and their songs. It's combining two of my favorite things in video games! Here are my top 10 favorite things in Splatoon! (These can change at any time) (not including Splatoon 3)

Of course, I have way more favorites, but these are my all-time favorites!

Only 5 Splatfests are listed (Final - Final Encore) because I was able to "participate" in only 5 (i.e.: Choose a team. I couldn't participate in Final Fest and Ketchup v. Mayo). Bolded team is the team I chose. I got to queen in every splatfest I played in.

Free heading to waste your time

I love Hero mode more than any other mode in the world of Splatoon. No competition against anyone except yourself. Testing how good you are without interference! I have 1000% Octo Canyon and 100% completed Octo Expansion (no help needed!) and beaten Inner Agent 3.

Fun Fact: I beat Octo Canyon during the Chaos vs. Order Splatfest and beat Inner Agent 3 in the Chicken vs. Egg (2020) Splatfest. The reason why was because I was bored (or I didn't have the online membership at the time).

Can't think of any more Barnsquids.

My O.C. (not Squib, one I call Octo Kid, who looks very similar to Squib. Female.) wears the Studio Headphones with the Reel Sweat and Punk Whites. I have some near pures (only the Studio Headphones in the gear list is an almost pure), but I'm too unlucky to get pures, and I am not up for grinding (I'm already grinding my lifetime octoling inkage). I do not have an image of my gear set yet.

Time to learn about YOU!

Let me retrieve some of your information real quick... (Don't worry, I'm not one to unearth anything personal, it's just not who I am!)

Wow, that was long! If you want to talk to me or have any questions, head on over to my page! It'll be nice to talk, don't deny it!

I'd make a sandbox, but I'm too lazy to do that (you can see a recurring theme here, can't you?).