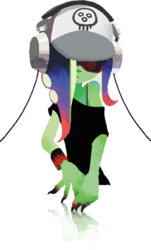 Ahato Mizuta (ミズタ アハト Mizuta Ahato)[2], better known by her psuedonym Dedf1sh, is a musician in Splatoon 2 whose songs were released as part of the Octo Expansion. Once a normal Octoling, she entered the underground test facility and became sanitized, losing her free will.[3]

Before the release of the Octo Expansion, a video entitled 'Catalog Mix' featuring short sections of some of the songs was made available.[4] It includes several songs heard in the Octo Expansion and its missions. The only song that was named prior to Octotune's release was Splattack! (Octo).

Before her disappearance, Dedf1sh was a promising DJ who spent most of her days making and mixing songs.[2] She had learned every genre of music, causing her music to be described as "mimetic".[2] She is diligent and hardworking,[2] but it's said that she had "doubts and conflicts about production" and let herself be sanitized to devote herself to nothing but music.[5] Due to her sanitization, she doesn't make music considering others, instead letting what comes out of her "inner self" take form.[6]

Dedf1sh is a portmanteau of "dead" and "fish", in reference to her sanitization and no longer showing vital signs. The name is likely mimicry of the DJ and musician, deadmau5. Both are stylized in leetspeak, which is a nod to computer hacking evidenced by the purposeful misspelling of "dead" and her song titles.

"Mizuta" likely refers to the Giant Pacific octopus, or "mizudako" in Japanese, while "Ahato" is the Japanese rendering of "Acht", or German for "eight".