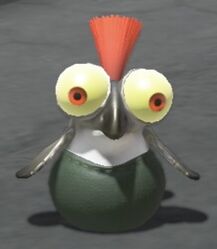 Ashley and Gerald are OC's (Original Characters) in Splatoon 3 created by YOLO2020. Ashley's signature ink color is yellow and Gerald's is neon green.

In Splatoon, Ashley had the "Hippie" hairstyle, second skin tone option, and the Magenta Pupil + Pink Iris + Green Ring eye color option from Splatoon 3. She wore the Squid Hairclip, School Uniform, and School Shoes. Her signature ink color was blue. She never had a weapon, as she was too young to wield weapons and couldn't control her squid form yet.

In Splatoon 3, her appearance is a little different. She now has the "Megalobraid" hairstyle, second skin tone option, the Magenta Pupil + Pink Iris + Green Ring eye color option, the "slit" eyebrow option, and the "ripped black leggings". She wears the Tentaclinger Earring, Tri-Octo Tee, and Punk Blacks. Her favorite weapon is the Tri-Stringer.

During a Splatfest, she wears the Squidband, Splatfest Tee, and BlobMob Flip-Flops. She also wields the Tri-Stringer during Splatfests. This is the same outfit that she wore during the Splatoon 3 Splatfest World Premiere. Ashley's choices for the Splatfests have been   Scissors,   Gear, and   Water.

When she became partially sanitized, her appearance drastically changed. She retained her hairstyle and eyebrow features, but wore the Ink-Tinted Goggles, White Inky Rider, and Punk Whites. Her legwear changed to the "colored patterned leggings", her ink color became   turquoise, and her eye color changed to the Brown Pupil + Cyan Iris + Orange Ring option. She also had a piece of the sludge that looked similar to the one that Commander Tartar used when Agent 3 was partially sanitized, however this piece was in her goggles. Her weapon was the E-liter 4K Scope.

Gerald is a Smallfry, a type of Salmonid, that Ashley befriended during her journey from Inkopolis to the Splatlands. His hairstyle is the "Classic" hairstyle.

Ashley is a very shy Inkling and is very curious about the world around her, and that tends to get her in trouble a lot. However, she was never a troublemaker as a young Inkling, she just happened to always end up in the wrong place at the wrong time. When she was in school, she often transformed in her squid form when she got frightened. She is a very kind Inkling, and cares a lot about her fellow Inklings and Octolings. When she becomes sanitized, her personality drastically changes. She is a little more aggressive and somewhat more confident. This temporary personality is a complete opposite of her real personality. This could be because you lose all personality when you become sanitized.

Just like any other Inkling and Octoling, Ashley has the ability to transform from into her squid form and she is unable to swim in water. She taught herself to do the Squid Surge and Squid Roll techniques. She is also good at using her Tri-Stringer, and she has great reflexes.

Gerald's personality is very different than that of a normal Smallfry. He is very curious, much like Ashley, and his curiosity tends to get himself lost frequently. This is actually how Gerald met Ashley, he got lost from his school of Salmonids and wandered off because he saw a Pigeon flying close to the shore.

Gerald also possesses great reflexes, and often warns Ashley about any danger that could be nearby. Gerald is very good at convincing Marie, especially since she finds him adorable.

Ashley was born in Inkopolis Plaza with a very unique eye color. The Inklings and Octolings in Splatsville call it a tri-tone eye color. Ashley was the first Inkling in Inkopolis with this eye color and was often bullied for her appearance. One day, the bullies decided to teach her a lesson and cut her right (left from her perspective) tentacle off and punched her in the face so badly it slit her right (again left from her perspective) eyebrow. After that day, she decided she had enough of the bullies and moved away. She heard about an uninhabited part of Inkadia that could be reach via Hammerhead Bridge. Along her journey, she met a little Smallfry. At first sight, she tried to kill it, but then realized it wasn't attacking her. The two then became best friends and Ashley named him Gerald. After a 2 year journey, Ashley and Gerald finally reached the Splatlands. It wasn't called the Splatlands when they arrived there, in fact, Splatsville was mostly a barren wasteland.

Ashley had heard about the events that happened in Splatoon and Splatoon 2. 5 years after the Final Fest in Splatoon 2, she noticed more and more Inklings and Octolings coming to the uninhabited region. They officially called the land Splatlands and the city Splatsville. At first, Ashley was scared to show herself again, but realized she wasn't the only one who looked different from the Inklings and Octolings in Splatsville. She grew accustomed to Splatsville and even participated in the Splatoon 3 Splatfest World Premiere (though she only remembers what team she chose and who won).

In Splatsville, Ashley noticed an old Inkling popping out of a manhole. She first disregarded this, but she became curious when she noticed the Inkling would only stare at her. When she and Gerald entered through the manhole, she was greeted by Craig Cuttlefish where she was appointed as the new Agent 3 of the New Squidbeak Splatoon. Before she moved away from Inkopolis, she had heard rumors about a secret society who fight the Octarians. She heard about how the previous Captain (a.k.a. Craig Cuttlefish) from this society had hired a new agent and received help from Agents 1 and 2. After finding out that she and her little buddy were working with Agent 1, Agent 2, and the new Captain of the New Squidbeak Splatoon (a.k.a. Agent 3), Ashley was overjoyed and willing to help the ones she had looked up to her whole life.

Ashley also heard about Deep Cut hosting the Anarchy Splatcast, but was very dissapointed in them for wanting all the treasure in Alterna for themselves. She was even a little reluctant about fighting them, but she knew that was the only way to save Craig Cuttlefish. Because she was never hired at Grizzco Industries, she never knew about Mr. Grizz until she had to defeat him. After finding out he that he was the CEO of Grizzco Industries, she now will only work when new pieces of gear are given out or when there is a random/rare weapon rotation.

After Ashley's first Big Run, she noticed one day that the sky was turning an unusual shade of grey. The other Inklings and Octolings didn't seem to notice any change, but soon Ashley was getting concerned when the sky was getting even darker. Suddenly, snow started to fall. When the Inklings and Octolings had snow fall on them, they got splatted and kept respawning every time. Ashley, Gerald, the Squid Sisters, Off the Hook, Deep Cut, and a few other Inklings and Octolings took shelter in the Battle Lobby Tower. To keep herself warm, Ashley put her hair up into the "Pigtail" hairstyle and changed her leggings to the "baggy sweatpants". She also wore the Knitted Hat, Manatee Swag Sweat, and Arctic Duck Boots and her ink color changed to   purple. This unexpected phenomenon had appeared all over the news, including Anarchy Splatcast and Inkopolis News. Nobody knew why Inkadia started to snow. Because of the weather, Turf Wars and Anarchy Battles were shut down. Upon further investigation from the Squid Research Lab, it seems that this storm appears right after a Big Run. The Big Run occurs because of the approaching storm. During the summer months, it rains instead of snows.

Main Article: Not This Thang Again?!.

One day, Ashley noticed an old telephone near one of the back alleys in Splatsville, next to the building where Salmon Run Next Wave is located. It told her that it could take her to the "promised land." She agrees, but gets kidnapped and sanitized by the telephone. Ashley serves as a boss and the Squid Sisters, Off the Hook, and Deep Cut have to defeat her in a similar way that Agent 3, Agent 4, and Agent 8 defeat bosses. After the three phases, Marie uses her Hero Charger loaded with low tide ink to knock Ashley's goggles off, freeing her from sanitization. After Ashley is defeated, the idol groups try to find Commander Tartar, but doesn't find it, as it had escaped during phase 3 of the boss fight. After everyone had left the boss room, Commander Tartar and Mr. Grizz team up together to destroy the world and begin again.

Since the incident, she has been very close friends with the New Squidbeak Splatoon. She looks up to the Squid Sisters a lot and often asks for advice from the duo. She also looks up to the Captain and wants to be just like her. She gave her the nickname "OG Agent 3" as an easier way for the team to know which Agent 3 is who. She doesn't know Agent 4 and Agent 8 very well, but she is trying to become close friends with her fellow agents. Ashley knows a little bit about Off the Hook, but only because she watched Inkopolis News on her squidphone. She is a big fan of Deep Cut, and she understands what it is like to live in Splatsville, so she was the most sympathetic when the trio told them why they wanted the treasure. Ashley didn't know the relationship between DJ Octavio and the New Squidbeak Splatoon, so she has only seen him do something good. Even after finding out what happened, she still doesn't think that DJ Octavio is a bad guy and that the two species just need to talk out their differences. Ashley despises Commander Tartar for what it did to her and wants revenge on it.

With the announcement of the new Pokémon Splatfest, Ashley has been curious to know what Pokémon is, though, the New Squidbeak Splatoon won't say anything to her about it. However, with a bit of convincing from Gerald, the Squid Sisters explain what Pokémon means. Now Ashley and Gerald are assigned to visit other worlds when need be.