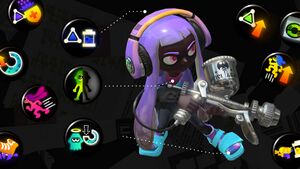 Promo image of abilities in Splatoon 3

Gear abilities, or simply abilities, are special attributes that are placed on wearable gear in the Splatoon series. Each provides different effects in Turf Wars and Ranked Battles, whose effectiveness is usually based on the amount of the specific ability the player has.

All pieces of gear do not have primary abilities that match the gear's brand's favored ability (except for a few, which were originally sold through SplatNet 2). As a result, achieving all slots on a piece of gear to be the same ability (colloquially called "pure" gear) is more difficult.

The groups of mutually exclusive abilities are as follows:

In addition to their primary abilities, all pieces of gear have up to three slots for secondary abilities (or sub abilities[1], casually referred to as "subs" by most players), which are stackable and provide 3 AP each.

The following tables show the amount of gear experience required to obtain a secondary ability on a gear item of a given rarity. Numbers denoted with asterisks (*) represent secondary ability slots that must be added by Spyke or Murch.

In Splatoon 2, drink tickets affect the probability of receiving a specific secondary ability when enough gear experience points are obtained after an online match. Drink tickets do not affect Murch's rerolling, unlike brands.[2]

Here are some examples to help with interpreting the table:

In Splatoon 2, the Aloha Shirt's brand is Forge which is a favoring brand as it favors Special Power Up, unfavors Ink Saver (Sub), and is neutral towards all other abilities.

Gear with a non-favoring brand has an equal probability of rolling any specific rollable ability. For example, in Splatoon 2, the Armor Jacket Replica has the Cuttlegear brand, which does not favor any ability.

Players can use more of an ability (stacking an ability) to achieve stronger effects. For exact details on the effects of stacking each gear ability, see the ability's article.

In general, the more a specific ability is stacked, the less additional effect is accumulated. The degree to which this occurs depends on the ability. To demonstrate this concept, the following charts show the stacking effects for some abilities. Note the diminishing returns as more of the same ability is used.

Spyke, who can be found in an alleyway in Inkopolis Plaza, offers to increase the number of secondary gear ability slots (to a maximum of three slots) or reroll secondary abilities in exchange for a Super Sea Snail (or 30,000 cash if the player is at level 20 or above and has no Super Sea Snails).

Some abilities do not affect certain things, and in-game descriptions do not inform players of these exceptions. For example, Bomb Range Up does not affect some bombs. Another notable example is that Run Speed Up does not affect the run speed while pushing a roller.

Murch, who can be found in Inkopolis Square, has multiple services that can affect a gear item's secondary abilities:

The following abilities were once present in the game but were later removed or replaced:

Per the Splatoon 3 Splatfest World Premiere, the abilities listed below feature in the game. Bomb Defense Up DX and Main Power Up do not return[4], being superseded by Sub Resistance Up and Intensify Action respectively.