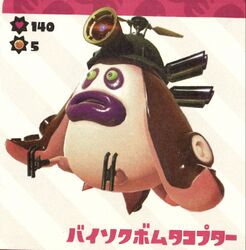 There is only one instance of this enemy in Octo Canyon, near the final checkpoint of Transfer Junction (mission 24).