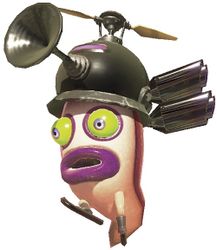 Rocket Octocopters are Octarian enemies that appear in Octo Canyon, the Octo Expansion, and Return of the Mammalians. They are variants of Octocopters and behave similarly to them, but they have two thrusters on each side of their helmets that allow them to quickly dodge left or right, somewhat similarly to a dualie dodge. Their tentacles are also darker than their standard counterparts. They are also the only Rocket Octarians to appear alongside a boss in Octo Canyon and the Octo Expansion, namely the Octo Shower.