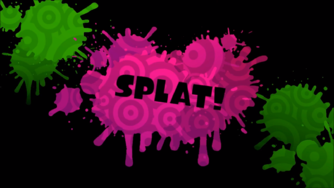 This article is about the jingle. For other uses, see Splat.

SPLAT! is a jingle.

SPLAT! is a very short jingle. It is heard during the sequence that plays when Agent 3 runs out of lives in an Octo Valley level.

A remix of the jingle was composed for Splatoon 2, where unlike the original where no artist was given, the Splatune 2 booklet lists it as a Turquoise October song. It consists of a heavily modified version of the first note sequence of the original jingle, along with what appears to be Callie or an enemy Octoling laughing. It is noticeably more upbeat than the original. Like the original jingle, it plays during the sequence that plays when Agent 4 runs out of lives in an Octo Canyon level.