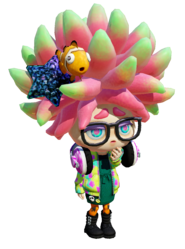 Annie (Japanese: アネモ Anemo) is a character in Splatoon and Splatoon 2. She is a sea anemone who owns the headgear shop, Cooler Heads, along with Moe in Inkopolis Plaza. She later opened the SplatNet 2 Gear Shop in Splatoon 2.

Annie has pink hair tinted with pastel green at the tips of her tentacles and also houses Moe in it. Her skin is a pale beige color similar to shopkeepers like Sheldon and Flow. She has cyan eyes with hot pink pupils and baby blue scelera, along with purple eyelids with eyelashes. Annie possesses a shiny indigo star shaped accessory in her hair, and also has black glasses. She has magenta headphones and a chartreuse jacket emblazoned with magenta and aqua blue squids. Annie also has a dark teal dress, orange tights with black squids on them, and black biker boots.

Annie has a shy personality, being extremely reserved and constantly ruminating, but she has many secret fans. When speaking, she usually trails off after some time, gradually getting quieter. She experiences difficulty greeting customers, and according to Callie and Marie in the Squid Sisters Stories, she moved online to the SplatNet 2 Shop because she got flustered too easily. According to The Art of Splatoon, despite her shyness, she has an exciting writing style, in addition to being a great artist. The book also says she is prone to having outbursts from time to time, though this is never seen in-game.

Moe the clownfish lives atop her head. He talks a big game, but he staunchly refuses to leave the safety of Annie's head.[1] It is hinted at in the nineteenth Sunken Scroll that Moe is the one manipulating Annie, reading, "Is the big fluffy one providing shelter for the little fishy one, or is the little fishy one manipulating the big fluffy one? We may never know..."

Annie's version of DJ Lee Fish's song Lookin' Fresh has louder treble, meaning emphasised vocals and minimal percussion, giving it a weaker sound overall. This is a reflection of her shy, detached personality, as well as the fact that she sells gear for the top part of the buyer's body, hence the emphasis on the treble.

(...Ah, w-welcome to Cooler Heads... If you want... please take a look around... All of the gear comes with abilities that will help you in b-battle... Please press

and tap 「？」 if you want to learn more...) - When a player at Level 4 or higher enters the store for the first time.

(Are you going to buy it...?) - When the player selects a piece of clothing.

(Are you going to e-equip it...?) - When the player purchases a piece of clothing.

(T-thank you very much~ T-to change your gear, touch "customize" on

, p-please.) - After the player chooses whether to equip a new piece of clothing.