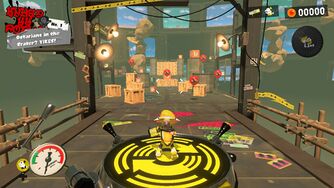 Crater Mission is a song.

Similar to Octo Eight-Step, Crater Mission is a remix of Eight-Legged Advance. It is the only song used for the non-boss missions in The Crater.

Instead of having a prominent guitar track or prominent (reversed) samples from another song, Crater Mission has prominent synthesized 'vocals' throughout (giving the song an acapella feeling to it), punctuated by trumpets. The first 'voice' starts as the intro ends, at around the 0:02 mark - this 'voice' has a somewhat rough, burpy tone to it, and provides much of the structure of the song, with the trumpets mainly accompanying this voice. Around the 0:33 mark, a second, higher-pitched 'voice' joins in, providing faster-paced 'vocals', more reminiscent of a backing vocal track, but being incomprehensible just like the first 'voice'. At the 0:58 mark, the second 'voice' ceases and is replaced by a third 'voice'. This new 'voice' has a rather yodel-like tone, and whilst it is still incomprehensible and artificial, this 'voice' sounds more like an actual voice. Between 1:10 and 1:19, the vocals cease (with an instrumental repeating the melody from the third 'voice'), with the third vocal making a triumphant return to join back in at 1:19. The song loops back to the intro at 1:21.

Crater Mission can be seen as an exaggerated parody of its precursors, working with the rest of the Crater's presentation to lure players into thinking that Splatoon 3's single-player mode will once again follow the same structure as the single-player modes of the prior two games (following the same structure as a prominent single-player level theme from the prior two games) - ultimately amplifying the impact of Alterna mostly abandoning said structure, for a less linear experience (along the lines of the Octo Expansion). The irreverent tone of the 'vocals' in this mostly-'vocal' track (especially the segment between 0:58-1:21) works to parody its precursors, not taking itself seriously, in contrast to the more refined, processed, and unironic tones of Eight-Legged Advance and Octo Eight-Step.