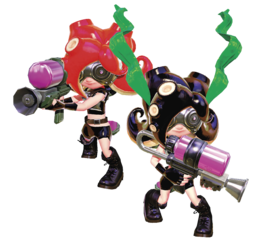 This article is about the non-playable enemy characters found in single-player modes. For the playable Octolings, see Octoling (playable).
For other uses of the term Octoling, see Octoling.

Octolings (Japanese: タコゾネス Takozonesu) are a subspecies of Octarians who serve as elite fighters in their army, and the octopus equivalent of an Inkling. They are recurring enemies in Octo Valley, Octo Canyon, the Octo Expansion, and Return of the Mammalians. Certain missions in these modes have Octolings as the only enemies, but they can also appear in other missions.

Octolings are the Octarian equivalents of Inklings. Unlike Inklings, they have thicker and curlier hair, with four tentacles instead of six (added with their arms and legs this gives them eight "limbs", as opposed to Inklings' ten), have their suckers above their hair than underneath, beige undersides of their hair, small round ears, purple circled eyes with a dash on the end, pointed fingers, and no spots at the ends of their hair.

Like Inklings, they can walk on land in humanoid form as well as swim through their own ink in octopus form, making up a somewhat small but dangerous portion of Octarian forces. They can use various main weapons as well as sub weapons. With no visible target, Octolings wander alone or in small groups and ink nearby surfaces for their convenience. Upon being engaged by the player, they make tactical maneuvers, quickly jumping in and out of their ink while shooting and throwing bombs. The best way to deal with Octolings is to catch them before they can react; once found, they are difficult to escape from, as they follow the player in octopus form and shoot at them in humanoid form.

All enemy Octolings encountered are female, and their Japanese name, タコゾネス (Takozonesu, a portmanteau of "octopus" and "amazons"), further supports this. Their body features seem slightly more mature than female Inklings', though this is a result of their clothing, as the in-game model is the same. These Octolings are considered elites compared to the playable Octolings, of which there are also male versions, and not every female Octoling can become a full-fledged soldier.

Octoling hair color seems unrelated to their ink, as they have their pre-set hair color regardless of the color set for the mission.

As shown in art of the Octolings in The Art of Splatoon, their eye markings are the same as their playable counterparts, but with a purple tinge at the edge of their 'eyelashes', and they have green eyes, like the other Octarians (even in octopus form, as opposed to the Inklings' eyes, which are grey in squid form, despite the player's chosen eye color). 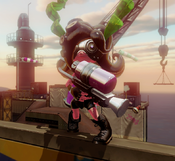 While normal Octolings have red hair and are fairly easy to defeat, later missions feature Elite Octolings instead, which are faster, more resilient, and deal more damage. Further separating them from the common Octolings are their darker hair and two long strands of seaweed attached to their heads. In Japanese, they are called デラタコゾネス (DeraTakozonesu, meaning deluxe or decorated Takozonesu).

They appear in the missions Octoling Invasion, Inkvisible Avenues, Octoling Assault, Propeller Lift Fortress, Spinning Spreaders, Octoling Uprising, Spongy Observatory, and Octoling Onslaught. The only weapons they use are the Octoshot and Splat Bombs.

Art of an Inkling with the full Octoling set

After completing Octo Valley, the player is awarded the Octoling Goggles, Octoling Armor, and Octoling Boots, based on the gear worn by the Octolings for use in online battles.

The Octoshot Replica is given to the player by Judd at Level 40, completing the Octoling set. 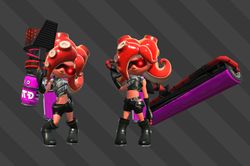 Renders of Octolings from Splatoon 2

In Splatoon 2, Octolings have a slightly different design of their gear, wearing the Octoling Shades, Neo Octoling Armor, and Neo Octoling Boots. Some Octolings have colored fingertips similar to that of Marina, and Elite Octolings have dark maroon-colored hair instead of black, but otherwise function the same as they did in Splatoon. Octolings in some stages spawn far away from Agent 4 and Super Jump near their location to attack.

In addition to the Octo Shot, the Octolings have Octarian versions of the Hero Blaster, Hero Roller, and Hero Slosher. Their versions are differentiated by being red and black instead of yellow and black. They appear in the missions Octoling Strike, Parking Garage, Octoling Assault, Propellerland, Octolings Ahoy!, and Octoling Workout.

Marina of Off the Hook is an Octoling and a former member of the Octarian army who has since defected from their forces.

The Octo Expansion introduces the Sanitized Octolings, using all previous weapons, as well as new mains, subs, and specials, including Octarian versions of the Herobrush, Hero Dualies, and Hero Brella. They are also able to use additional subs including Burst Bombs and Autobombs, and can now use specials, including the Inkjet, Tenta Missiles, Sting Ray, Ink Storm, Splat-Bomb Launcher, Ink Armor, and Splashdown. The physical coloration of the Octolings is very different from normal ones. They are shown to have pale greenish skin, dark teal-colored fingertips and blue hair with neon yellow tips. They possess the ability to Super Jump, and in Labyrinth Station they Super Jump from beams on the roof. Enemy Octolings do not use chargers or splatlings.

While both types of characters are called "Octolings" in English material about the Octo Expansion, the Japanese version makes a notable distinction between the player Octoling, called タコ (Tako, "Octopus"), and the enemy Octolings, called タコゾネス (Takozonesu, Octopus-Amazon").

After completing the Octo Expansion, the player is awarded the Octo Shot Replica and the Octoling Shades, Neo Octoling Armor, and Neo Octoling Boots, based on the gear of the Splatoon 2 design Octolings, for use in online battles, if one, two, or three sets of mem cakes are collected, respectively. The Octoleet Goggles can be obtained as gear from Salmon Run.

Enemy Octolings return in Splatoon 3 with a change similar to that of other Octarians. They now have reddish-brown fur for their hair, wear pink "lipstick", and have a new outfit consisting of new goggles with Fuzzy Ooze covering the lenses, a leopard top, new legwear, and boots styled after sea mines. They only appear in the stages Stamp 'Em Out, Bet You Mist Us!, Alterna Space Center: Lift, and After Alterna.

Much like in the previous games, they wield the Octo Shot and Splat Bombs. In Bet You Mist Us! and After Alterna, they use various weapons, much like in Splatoon 2, including the Splat Roller, Blaster, Slosher, Octobrush, Splat Dualies, and Splat Brella, as well as various sub weapons including Burst Bombs, Curling Bombs, and Autobombs. In After Alterna, they use various specials including the Splashdown, Tenta Missiles, Inkjet, Ink Storm, Big Bubbler, and Wave Breaker.