From Inkipedia, the Splatoon wiki
(Redirected from Playable Octoling)
Jump to navigation Jump to search

This article is about the playable characters. For the non-playable enemy Octolings found in single-player modes, see Octoling (enemy).
For other uses of the term Octoling, see Octoling. 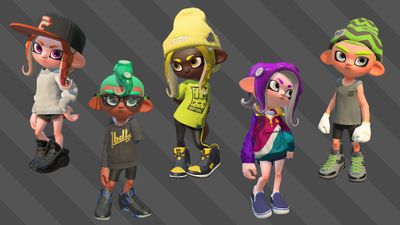 The player can switch between Inklings and Octolings in the Player Settings. The game will save both the player's Inkling and their Octoling simultaneously, likely due to single-player modes where only one of the two is playable.

The playable Octolings were once fighters in the Octarian military, brainwashed by the music of DJ Octavio[1], but when they heard the Calamari Inkantation, it nullified the brainwashing effect, freeing their souls from the oppression. Many (but not all) of them escaped to Inkling society in Inkopolis afterwards, hoping to start anew. This happened during the "Enter the Octobot King!" mission of the first game.

Like Inklings, Octolings can switch between a humanoid form and an octopus form.

Their octopus form is widely different to the Octarian ones, with two long tentacles in the middle that helps them move, two smaller ones in front that resembles a mustache, and four smaller ones on the underside, along with a pair of eyes that are separated and resemble an Inkling squid's eyes. The suction cups are located on the underside of their tentacles, as opposed to their humanoid form having suckers on the top side. The tip of their tentacles, as well as the head, have a ring pattern on them. They have a total of eight tentacles.

The humanoid form has black markings around their eyes, with both genders having two sharp edges and a thicker underline, where the female Octoling has an added dash to their markings. Octolings do not have their markings connect over the middle, having it seperated compared to Inklings. Their teeth are also different, having one sharp end tooth on their left side on the top, and another sharp tooth on the right side on the bottom. Their ears are round and asymmetrical, with the right side being flat and the left side being indented, each respectively resembling the fin and siphon on an octopus. Similar to enemy Octolings, the end of their fingers are semi-sharp, but the playable Octolings do not have these ends being tinted in their ink color. Their eyebrows are also different from Inklings, with males having a half oval shape and females having a curved droplet shape.

Just like Inklings, Octolings are able to choose from a variety of skin tones, hairstyles, and eye colors. The choices of eye color and skin tone are identical to the Inklings. Both the male and female Octolings possess two different choices in hairstyle. The female Octolings' first hairstyle has two thin tentacles in front reaching past their shoulders and two thicker, shorter tentacles in the back, all with curled tips. Their second hairstyle has two tentacles tied back into a ponytail, with the other two as sideburns. The male Octolings' first hairstyle features a mostly shaved style, with one large, curled tentacle and three smaller tentacles lined up along their head to create a mohawk (The mohawk design might be a reference to the Octotrooper tentacle). Their second hairstyle is an afro reminiscent of an Octopus' mantle. This hairstyle notably molds while wearing headgear.

Some Octolings (namely Marina) have special features, such as a plum color on their tentacles, and brown pupils shaped like the infinite logo. Playable Octolings, like their enemy counterparts, have sharper nails than Inklings; Marina's are colored teal, which is another special feature for Octolings.

The Octo Expansion introduces the mysterious Octoling character Agent 8, and will allow players to use Octolings in multiplayer upon completing its story mode. The male version of Agent 8 is also the first appearance of a character which is clearly shown to be a male Octoling in-game. Their octopus form is more reminiscent of the squid form of Inklings, with a key difference being that their eyes are separated instead of together.

When the player completes the Octo Expansion, they will be able to change from being an Inkling to an Octoling in the player settings. Playable Octolings have different animations for trying on gear, winning or losing, and for taking photos with amiibo. The Squid Research Lab Tumblr showed that Octolings are more serious than Inklings and have an interest in technology. For example, instead of aiming with weapons, they will look more closely at them to see how they work, they wave around their phones and look at them more closely, and their icons in battles are not seen smiling. Due to have been defecting from the Octarian army, their animations around the Square make them look curious and almost confused.

While both types of characters are called "Octolings" in English material about the Expansion, the Japanese version makes a notable distinction between the player Octoling, called "Octopus" (タコ Tako), and the enemy Octolings, called "Octopus-Amazon" (タコゾネス Takozonesu). The latter specifically refers to the older elite female unit that only a select few of the former can become.