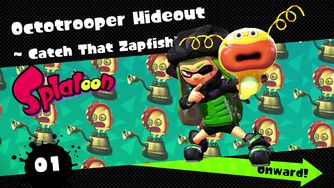 Onward! is a jingle.

Onward! is a very short jingle, lasting roughly five seconds, taking a lot of elements from Turquoise October songs. It is the signature five-note melody of the Octarians playing twice, the second time with a higher pitch. Shortly after, a radio static sound effect is heard on the iris out shot of the Zapfish or a plush of it, although said sound effect is absent from the Splatune version. It is heard during the sequence that plays once the player finishes a mission in Octo Valley.

A remix of the jingle was composed for Splatoon 2, where unlike the original where no artist was given, the Splatune 2 booklet lists it as a Turquoise October song. Similar to the original, it plays after successfully completing a mission in Octo Canyon.

Onward! (Return of the Mammalians)

A remix of Onward! was created for the missions in Splatoon 3's single-player campaign Return of the Mammalians. However, unlike the previous games, it is only played in the four missions in the Crater, and a different jingle plays in Alterna.

The intro of Eight-Legged Advance is a version of the Onward! jingle. The "burp" sound effects have a great similarity to the sounds in Onward!

Main article: I am Octavio

A choral version of the Onward! jingle plays throughout I am Octavio as a musical motif.

Like Eight-Legged Advance, the intro of Octo Eight-Step is a version of the Onward! jingle, this time on a flute.

Whilst stunning a Scrapper, a jingle is played, consisting of the Onward! theme being played with what sounds to be car horns.

Similar to DJ Octavio's usage of the jingle, the demo version of Ebb & Flow contains interpolations of the Onward! theme, hinting at Marina's Octarian origins.

The Onward! jingle can be heard twice in the Inkopolis Memorial Mixtape. The first time, the same version of the jingle heard in Eight-Legged Advance plays, and the second, which seems to be the same choral version that plays in I am Octavio, is heard after the Opening jingle by Wet Floor.

The name of the song states that the player has just completed a mission and it is time to continue onward.