The Battle Lobby is the online mode category selection screen of Splatoon and Splatoon 2 where players can choose a type of battle mode to play. In Splatoon, the player can enter Inkopolis Tower from Inkopolis Plaza or tap on "Lobby" on the

map to access the Battle Lobby. In Splatoon 2, the player can enter Deca Tower from Inkopolis Square or select "Lobby" after pressing

Upon entering the tower, the player is presented with five different connection options to choose from. These options are Squad Battle, Ranked Battle, Regular Battle, Join Friends, and Private Battle. Selecting any of these options allows players to join online or create lobbies. A sixth option, Recon, is also available, although it does not connect players to online lobbies. 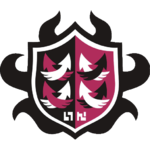 Squad Battles allow for players to join Ranked Battles. However, unlike the Ranked Battle option, this allows any two to four friends to form a squad to battle in ranked matches against another squad. If a squad is comprised of only two players, it is paired up with another two-player squad to form a team of four against four other players. If a squad only has three players in it, it can be put in a 3v3 or 3v4 battle. Four-player squads can be put up against three or four-player squads. Players' ranks go up and down as they win and lose until they reach either of the "S" ranks. The matches are played on either of the two stages in the rotation and with the mode currently in the rotation for normal Ranked Battles. Unlike other online modes, players can change their weapons and gear before matches and can leave the lobby at any time.

This mode was succeeded by League Battle mode in Splatoon 2.

This option allows players to join Ranked Battles with players around the world as a random online version of Squad Battles. This mode has a ranking system that groups players of similar skill together in a battle. This mode is more competitive as teams get significantly more Battle Points and Cash upon winning a battle. The players' ranks are also negatively affected upon a loss, making winning an even bigger priority in these battles. Due to this competitiveness, players cannot join their friends in this mode. There are three potential modes in Ranked Battles: Splat Zones, Tower Control, and Rainmaker.

This mode returns in Splatoon 2, acting identically to how it did in the first game. Additionally, one extra mode was added, in the form of Clam Blitz.

This option allows the player to join non-ranked online battles with all players around the world. These battles are for more casual play and both the winning and losing teams get rewards at the end of each battle. The only mode in Regular Battles is Turf War, Splatoon's main mode.

This mode returns in Splatoon 2, acting identically to how it did in the first game.

This option also allows players to join turf wars or ranked battles (although this can also be done in league battles). However, rather than joining a game with random players from around the world, it instead allows players to join any friend who is currently playing in a Regular Battle. If the friend is joinable, upon selecting their name, the player has to wait in a loading screen until their friend's match is over before being able to join. After the results screen is finished, and if one of the eight slots opens up in the friend's lobby, the player can then join them. It should be noted that this option does not guarantee that the two friends are put on the same team.

This mode returns in Splatoon 2, acting identically to how it did in the first game.

Private Battles allow players to create a custom lobby that friends can join. The host of the lobby can change several different factors of the match, including which mode is played and which stage is played on. The host can also decide which players can go on each team. The team match-ups can range from any combination of one to four players. Players' ranks and levels are not affected in these battles. However, like Squad Battles, players can change their weapons and gear before the match, and any player can disconnect from the lobby at any time.

This mode returns in Splatoon 2. In addition to the eight players in each battle, there can now be up to two additional spectators added to the lobby. The host can also set a password for the lobby.

while in the Battle Lobby, allows the player to freely explore any of the stages currently in the rotation for Regular Battles, Ranked Battles and League Battles before going into an online lobby. This mode is useful for finding vantage points on a stage or getting used to a new stage in rotation. If the player does recon on any stage currently in the rotation for Ranked Battles, the Tower, Splat Zones, and Rainmaker will also be on the stage (along with any changes to the stage layout), depending on which mode is currently in rotation.

This mode returns in Splatoon 2, acting identically to how it did in the first game. With the addition of Clam Blitz, clams and the clam basket can appear on the stage as well.

Upon entering Deca Tower, the player is presented with six different connection options to choose from. These options are League Battle, Ranked Battle, Regular Battle, Join Friends, Private Battle, and Online Lounge. Selecting any of these options allows players to join online or create lobbies. A seventh option, Recon, is also available, although it does not connect players to online lobbies.

League Battles allow for players to join Ranked Battles. As the replacement to Squad Battles, it acts very similarly - rather than having eight random people from around the world join the lobby, this option instead allows any two or four friends to form a squad to battle in ranked matches against another squad. If a squad is comprised of only two players, it is paired up with another two-player squad which is put up against four other players. Four-player squads can only be put up against other four-player squads. Players' ranks are not affected. The matches are played on either of the two stages and the mode in rotation. Unlike other connection options, players can leave the lobby at any time.

The Online Lounge allows players to use the Nintendo Switch Online app to voice chat while playing the game. 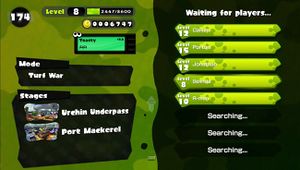 Lobbies are the areas where players wait for battles to begin. Once a player joins a lobby after selecting on any of the options listed above, they cannot leave or change their weapon or gear unless it is a Private Battle.

When the player selects one of the connection options, Nintendo's matchmaking service finds a lobby for the player to join. If there is no joinable lobby for the option the player selected, they are placed in a waiting screen with a timer that shows when the first joinable lobby will become available. Upon joining a lobby, the player must sit on a lobby screen until the battle begins. This screen displays eight slots on the right of the screen, each of which fills up as players join the lobby. The screen also displays several other things, including:

While waiting for the battle to start, as well as while waiting to join a lobby, the player can play a minigame on the

. Squid Jump is the only minigame available from the start, but more minigames can be unlocked by playing through amiibo challenges. Once eight players have joined the lobby, the screen will display "BATTLE TIME!" in the North American version of the game, and "Let Battle Commence!" in the European version. Then the minigame will pause and the battle will start.

After the battle has finished and Judd has determined which team has won, each player is taken to a results screen, which shows how many splats and deaths each player had and how many Battle Points each player earned. After this, the player's Rank (Ranked Battle only) and level may change depending on performance, and the player is given the option to either play another round in the same lobby or disconnect from the lobby. If the player chooses to disconnect, they are taken back to the Battle Lobby. 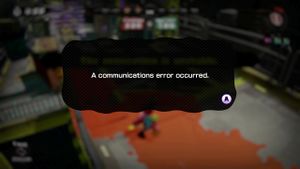 If a player's internet connection is not good enough to stay in the lobby or battle, they are disconnected from the lobby. This is also called a communications error. If this occurs before the battle starts, the player simply receives a message that states that "A communications error occurred" and they are disconnected from the lobby. If this happens during or directly after a battle before the results screen, a message comes up saying the same thing, and the player will again be disconnected. On the results screen, it shows that the disconnected player had zero splats and deaths, and in Regular Battles, it shows that they inked zero turf (unless their team won, in which case it shows that they earned 1000p). In both instances, the disconnected player returns to the Battle Lobby. 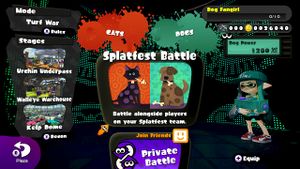 The Battle Lobby during a Splatfest.

During Splatfest, the lobbies are a bit different than normal. Upon first entering Inkopolis Tower, the player is not given the five normal connection options. Rather, the only options in the Battle Lobby are to create a Private Battle or to join a Splatfest Battle. Upon joining a Splatfest lobby, one can notice other differences in the online lobbies as well. Rather than having eight player slots on the right of the screen all in a row, the eight slots are divided into two groups of four. These two groups represent the players that will be battling for both Splatfest teams. Once all the players of one team have joined, the screen says that that team is ready. Once the other team joins, the game says that they are ready, and then the battle starts.

Several different counters and meters are displayed on the lobby, each serving a different purpose.

The level meter indicates how "fresh" a player is. This is a general indicator of that player's playtime but is necessary for things like being granted access to shops or Ranked Battle.

The vibe meter shows how well a player is doing in the current game session. It is measured using flags, with every victory scoring one extra flag, but every loss decreasing the number of flags by a variable amount. A player's vibe determines the amount of Cash they get from Judd when they talk to him.

The rank meter shows what rank the player is at and how close or far they are to going up or down a rank. Ideally, players in Ranked Battle get paired up with players with similar ranks.

During Splatfest, players had a meter that started them off at the lowest classification, and as they battled more, it went up. A player's classification determined how many Super Sea Snails they got at the end of the event.

The Cash counter shows how much Cash the player currently has.