The E-liter 4K is a main weapon in Splatoon 2 and Splatoon 3, a successor to Splatoon's E-liter 3K. It is a charger-type weapon that sacrifices mobility, ink consumption and charge time for extreme range that is only outclassed by its scoped variant.

In general, the E-liter 4K is based on a plastic gas pump handle with a metallic ink tank on the back and an elongated metallic spout with a plastic attachment and a black sight which acts as the barrel.

In Splatoon 2, the plastic parts are yellow and the ink tank changes color to match the user's ink.

In Splatoon 3, the plastic parts are blue, the handle also has a seven-segment LCD display, and the tube connecting the handle to the ink tank and a spring on the barrel change color to match the user's ink. 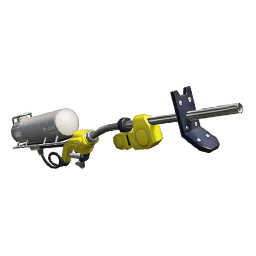 The E-liter 4K comes with Ink Mines and Ink Storm. It can now store a charge for one second.

Differences from the E-liter 3K 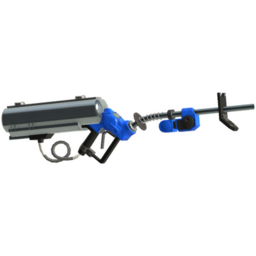 The E-liter 4K returns in Splatoon 3 with a new design and comes with Ink Mines and the Wave Breaker.

It appears in two missions in Alterna:

Reaching certain Freshness levels with the E-liter 4K will reward the player with special badges that they can use on their Splashtag.

"E-liter" is a pun between elite and liter (the metric unit of volume by which gasoline is sold in many countries).