Weapon brands are the names and logos of the in-game companies that make the weapons in the Splatoon series. Unlike the brands for gear, weapon brands do not have any influence on abilities.

The brand has a very unified look, based on water toy guns. The weapons feature bright, plastic colours of light green, dark green and red. The exceptions to this aesthetic are the Splattershot Jr. and Splattershot Pro series but have a clear toy gun inspiration like the rest. Another attribute that the Splat weapons share is that most of them feature the word 'Splat' in one way or another. The conjectural name 'Splat' has been assumed from this theme. Despite falling into this pattern with its English name, the Splat Brella is not part of this brand - in the original Japanese, it does not use the スプラ (Splat) prefix Splat-branded weapons use.

In Splatoon 2, the company's designs are less colorful and more stylised, and instead of preferring bright green colors, they prefer purple, dark green and dark blue or purple colors. 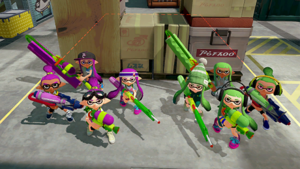 The alternate sets of their main weapons have the suffix 'Deco' and are decorated with either patterned rhinestones or yellow arrow stickers. The suffix 'Deco' is short for either 'Decorated' or 'Decoration'.

The "Dolphin" brand features weapons based on common, water-related household items, such as products for cleaning or gardening.

The alternate sets of its Nozzlenose main weapons have the suffix "D" and are decorated with a clip of a dolphin logo. "Dolphin" is a conjectural name assumed from this sticker.

The dolphin may be a reference to the "Dolphin" codename for the Nintendo GameCube.

Outside of their weapon manufacturing, the Neo company are also shown to be a construction company. It has construction sites at various locations in Splatoon, with their mascot known as the "Slow Your Roll" Mole. The stage Hammerhead Bridge is one of them, and will be the largest bridge in Inkopolis when completed. However, it is implied by Callie and Marie that the construction has been stalling for quite some time, for unknown reasons. As of Splatoon 3, construction of Hammerhead Bridge has been completed.

The tutorial area also has two apartments under construction, both adorned with two signs with the Neo logo and text. The company also was responsible for the redesign of Urchin Underpass in August 2015, Starfish Mainstage in September 2018 and The Reef in November 2018.

The alternate sets of their main weapons have the word "Neo" as a suffix or prefix and are decorated with a sticker of their logo. The Sloshing Machine Neo's in-game description describes this sticker as "sweet". 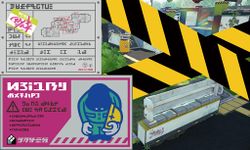 The Nouveau brand consists of weapons based on brushes and accompanying art supplies[1]. Their weapons are made almost entirely with light materials, such as plastic or wood, with some metal pieces holding them together or functioning as grips.

Their weapons tend to favor high mobility and rapid movement across stages. The Disruptor and Toxic Mist, on the other hand, focuses on restricting the opponent's movement instead. Either way, the player is given an advantage in mobility. The Nouveau main weapons generally have a rather short range in favor of wider coverage, with the exception of the Ballpoint Splatling that has longer range and slightly slower mobility.

The alternate sets of their main weapons have the suffix "Nouveau" and are decorated with a white sticker, with red and black text written in Inkling. The word "Nouveau" means "new" in French. 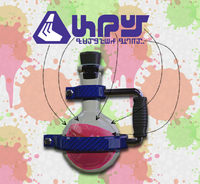 The logo that appears on the weapons

The alternate sets of their main weapons have the prefix 'Custom' and are decorated with a sticker of their logo, or a differently colored variant of it. Despite falling into this pattern with its English name, the Custom Splattershot Jr. is not part of this brand - in the original Japanese, it uses a different prefix than the suffix of Custom-branded weapons.

Both of the Ammo Knights series have a very mechanical look to them and are seemingly made entirely out of metal parts. Most weapons have parts that have been spray-painted in either chrome or gold. 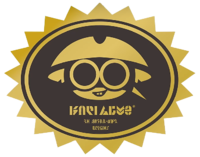 The Sheldon's Picks brand contains recolored variants of other main weapons, and are usually very visually distinct from their originals. Each primary weapon comes with a new kit, creating a third variant of each. In Splatoon, weapons in this range were released in two volumes.

The Foil brand was one of the weapon brands introduced in Splatoon 2. The alternate sets of their main weapons have the prefix "Foil" and are decorated with a sticker of the company's logo. Foil brand weapons have some type of dual functionality in their operation, as symbolized by the arrow symbol pointing to both sides in their logo.

. The alternate versions of their weapons have the "Sorella" name and a different pattern. The suffix "Sorella" means "sister" in Italian.

Outside of Turf War, this well-established company makes regular umbrellas with the help of hired talented umbrella artisans. They made their name by using traditional techniques within their umbrellas. The line of Umbrellas used in Turf War was created by the New Producers Development Division of the company.

The "Whale" brand is one of the weapon brands introduced in Splatoon 2. The brand name is assumed from the logo, which appears to depict a humpback whale.

The weapons under this brand appear to use sonars, referencing the humpback whale's "singing".

In addition to sonar-based weaponry, this brand also makes vessels to navigate or detect objects on or under the surface of the water.

The "Shark Fins" brand is one of the weapon brands introduced in Splatoon 2. The brand name is assumed from the logo depicting a pair of shark fins.

This brand appears to produce carbonated beverages, as weapons under this brand are based on them.

The brand's logo appears on vending machines and containers in Port Mackerel, on signs at Arowana Mall, and on the "energy drink" locker decoration in Splatoon 3.

"Stringer" is a new weapon brand introduced in Splatoon 3. They are originally a fishing supplies manufacturer that turned to weapon production in wake of Turf War's rising popularity[1].

Notably, the lower device of the Big Bubbler appears to contain a Squid Beakon, which may imply that it, and the Bubbler it is derived from, are part of the Custom brand.